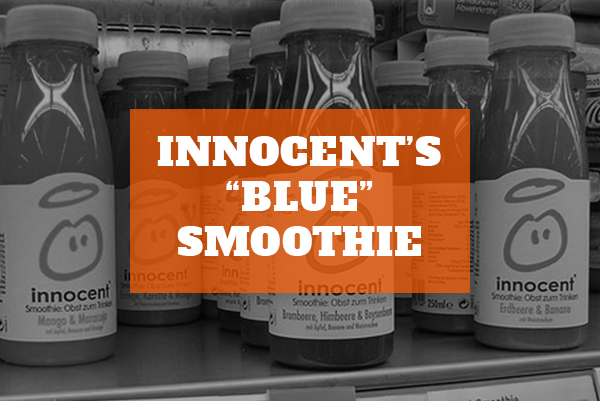 If you’ve been keeping up with our blog, you’ll already know we’re big fans of the Innocent brand. They inject masses of personality into their marketing campaigns and absolutely nailed it this month, so it’s no surprise they’re our pick for our first ever Marketing Campaign of the Month. Got a pick for May? Let us know.

A few weeks ago, Innocent launched a new “Bolt From The Blue” smoothie. Here’s the advert they posted on Twitter:

Did we mention it’s blue? pic.twitter.com/7T4QFZlWGm

Sounds great, but… it’s kinda green, isn’t it? Naturally, Twitter was quick to point this out, but Innocent – the sneaky little devils – had anticipated this. In fact, their original advert made such a point of saying the new drink was blue that I’m pretty sure they wanted people pointing this out. Why? Because it let them do this:

Looks blueish blue to be honesthttps://t.co/2o0VmjgqVE

Post after post of Innocent replying to audience members stubbornly insisting their new green smoothie was blue. Funny responses that people have clearly enjoyed reading. Thousands of likes, thousands of retweets. They clearly know how to use their brand personality to get engagement from their audience. People forget they’re being marketed to when the marketing is this good. The first thing I did after coming across this advert was to show it to people around me, not just because I appreciate the marketing brains behind it and wanted to discuss, but because it was funny. This kind of viral marketing is the holy grail for all brands.

Have you got a favourite marketing campaign from April? Got any candidates for May you think we should take a look at? Drop us a line by email or on Twitter.

Marketing Campaign of the Month