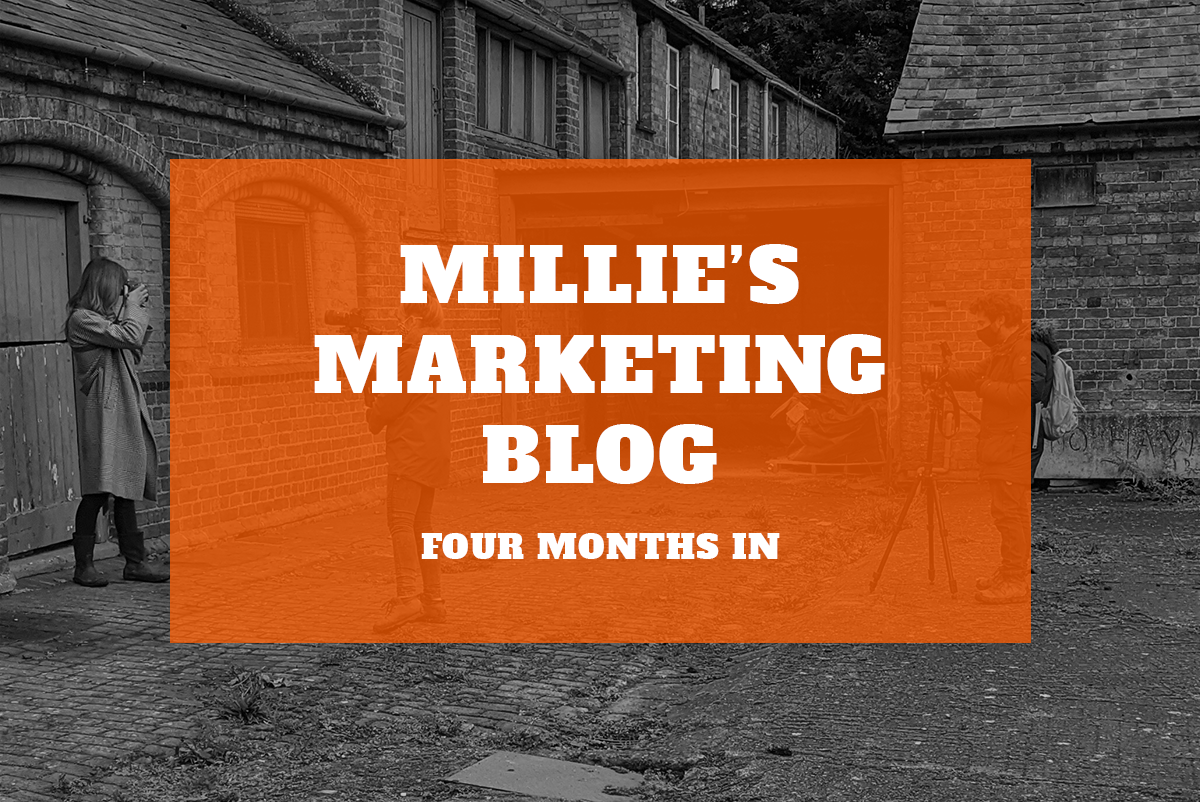 Hello, everyone! Firstly, I’d like to wish you a belated Happy New Year.

I’m back again with some exciting insights on how my apprenticeship is going. It’s only been 2 months, but with the continuous growth I’m experiencing, I feel like a lot has changed. The first big thing is that I now go to work and don’t give it a second thought. When I first started, it still felt so surreal, but it’s become normal now.

I’ve mostly been working from home, thanks to Covid, but I still jump into opportunities given. One of the opportunities that arose was working with the film crew on some exciting projects.

I hadn’t realised how different film and photography were. Even though they both rely on lighting and precision, there is much more equipment involved in film. To get all of the equipment into the studio, it took three people two trips, and then it all needed setting up…

Why so much equipment?

There were many reasons there was so much equipment. A fair amount was for lighting, which had to be smooth and natural to help complement people rather than products.

Shooting film also requires a sturdy tripod as shaking is more noticeable, and it takes more time to refilm someone talking than to retake a picture.

Finally, the other most important part of video is the microphone if someone is talking.

Hannah Argyle is a self-taught photographer who is looking to help others trying to do the same thing. We spent two days with Hannah, one day out at Delapré Abbey and the other at her studio.

The day out was lots of walking. The point of being out walking was to film cutaways of Hannah finding nice scenery to photograph. The cutaways will help the content feel more engaging and viewers will have something to look at other than someone talking directly at the camera.

Delapré Abbey has some lovely scenery, including a lake to walk around, and I definitely want to go there again.

After getting the shots, we made our way to Hannah’s studio to film the talking content. This was mostly sitting behind the camera and making sure the picture and sound were as clear as possible. This included checking there was lighting that looked natural, and ensuring the microphone was in a good place.

Microphones are very sensitive, which helps in hearing people who need to be heard, but causes a few problems. One big issue was when someone’s belly would rumble, or if someone needed to sneeze. A lesson I learned was if I’m ever on a Film shoot again I need to make sure I eat first!

Another problem I learned about was the microphone being especially sensitive to words with the letter S in them. There are apparently a lot of different ways to fix this, but what we did was face the microphone down. Then the only problem was rustling if hair covered it!

Then there was an Avon video shoot. This was a make-up shoot consisting of a model and make-up artist. This shoot was back in our studio in Northampton, and we had as few people on set as possible, used masks, and kept our distance as much as possible to help keep everyone safe.

The Avon shoot was completely different from the Hannah Argyle one.  We started by wiping everything in the office and sanitizing to ensure it would be safe for all involved. Then, when everyone had arrived, the film crew were setting up whilst others were discussing the looks to be shot.

When we got to the beginning of the shoot, there was lots of stopping and starting. With two cameras constantly on the model’s face, the camera operators had to make sure they stayed out of each other’s shots and cover as much of the look as they could. There is a rule known as the border rule in film. This simply means that someone should be filming up to a point in the room, and the other person should film the other side.

Other than the film side of things, I’ve been ordering any props we need for photo shoots, completing coursework, and helping with general Amplitude Media work.

Hopefully, by the next time we’re here, I will be able to go into the office, and we’ll all have returned to a somewhat normal life. Stay safe and I’ll speak to you all soon!

Behind the Scenes, Video