Gillette – Is their new advert a mistake? 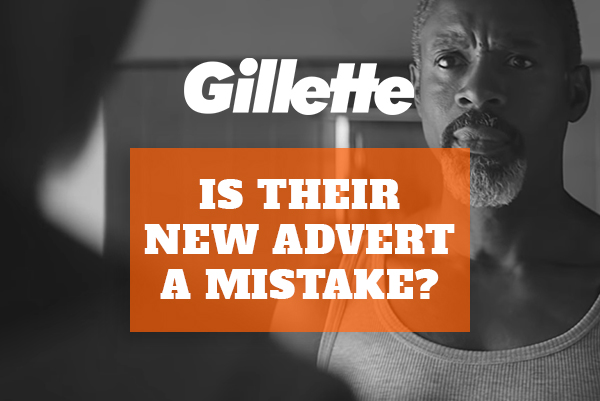 Update: The overall reaction to the video is hard to gauge. Youtube stats suggest it’s gone down poorly, while Facebook stats suggest it was well received. We’ve tweaked the post below to reflect this.

Every so often brands try to reinvent themselves with a carefully crafted advert. Some do so with fantastically entertaining commercials (looking at you Old Spice), others use social commentary to great effect (e.g. Nike’s partnership with Colin Kaepernick), and it looks like that’s what Gillette aimed to do.

Gillette released their latest advert yesterday, and, oh boy,  it’s certainly stirred up some emotions. At the time of writing, just 24 hours after release, it has over 256k dislikes on Youtube and only 38k likes. Facebook, on the other hand, shows a largely positive response (though negative comments being deleted may be skewing things), while Twitter is more balanced. Generating such a buzz is usually a good thing, but Gillette may have alienated a large portion of their core demographic. How this will affect them in the long run remains to be seen, but we’re going to take a look at why this might have happened.

Before we look at the ad itself, we should get something out of the way lest Amplitude is viewed in the wrong light. The social aim of the advert is admirable. The way some men behave is outdated, unhelpful, and, in some cases, downright harmful. We’d like to see that change. We’re in agreement with Gillette there. We like the message, but feel the advert might hurt their business. This blog post isn’t a dissection or a condemnation of their views, but a commentary on how they went about communicating them.

Here’s the ad in question:

Firstly, let’s look at what Gillette were trying to do. Their slogan “The Best A Man Can Get” has been in use since 1989, before the advent of the internet and the current wave of modern socially progressive movements. Back then, the slogan was all about selling men the idea of being manly, that a Gillette razor was part of every Real ManTM’s tool kit, alongside a cool wife and a cool job. In the current climate, with constant discussions around sexual harassment, toxic masculinity, and gender equality happening all over the place, it’s easy to see why Gillette wanted to revitalise their slogan for the modern day.

Other brands, such as Nike, have revitalised their brands using divisive campaigns, and it looks as though that’s what Gillette was going for here.

They started their revitalisation back in 2018. The slogan “The best a man can get” was no longer about men getting the best in life, but was now about being the best man possible. A clever switch, and a great way to retain a valuable trademark. However, their adverts weren’t well received on Youtube…

Gillette had the beginnings of a successful rebrand, but it went off the rails somewhere. The performance of these 2018 adverts should have raised a red flag. Something wasn’t resonating with a big chunk of their core audience for men’s razors.

Comments in response to their adverts indicated some men weren’t happy with being told what to be, while others said that the campaign was too heavy handed and barely showed razors. What form Gillette’s internal discussions took, we’ll never know, but they continued with this messaging. Roll on 2019…

With high-production value, clips referencing viral videos, and socially progressive messaging, the advert had the ingredients of a hit. But many amongst their core audience didn’t like it. Why? The reasons, as we see it, are several:

Gillette has a massive market share, and a large portion of their core audience didn’t feel Gillette needed revitalisation. Personally, we feel their decision to revitalise their slogan was the right one. The 1989 messaging would have come back to bite them eventually, but the revitalisation could have been done subtly over time, with less fanfare and furore.

The advert leads people to focus on the negative. We’re shown vignettes of men being harassers and bullies, followed by sequences celebrating men stepping in to stop them. On paper, that sounds like the right thing to do – present a problem, then the solution – but it seems that many amongst Gillette’s audience took “the problem” section as a condemnation of their characters. When “the solution” was then presented to them, their receptivity to that messaging had already been diminished, and they took further affront to Gillette telling them how to act.

It’s an advert for razors that barely features razors. Not featuring the actual product works just fine for some brands, but not here it seems. Razor advertisements have almost always featured the product, and it seems the audience appreciates that. This may stem from people having a desire to see the bladed implement they’re going to be dragging across their faces, which we think is understandable.

Ultimately, we think the reaction from their core audience boils down to one thing. The ad wasn’t targeted at them. As a result, Gillette created an advert that preaches only to the converted, and alienated much of their audience.

As said above, only time will tell how this affects Gillette in the long run. It may be that Gillette has a master plan that involves targeting new segments and leaving old ones behind. It may be that this was an unexpected faux pas. Many say they’ll boycott the brand, but experience shows that convenience and cost often mean people don’t follow through. Others have praised Gillette for being socially progressive. These people may look at the brand in a more positive light, prompting purchases. Will the new customers number more than the lost ones? Who knows.